Moving to direct drilling is just another logical step in improving arable farming practice for Philip Woods, who runs some 3,000 acres of arable land from his base at Kensworth, Dunstable, Bedfordshire.

His company – P R Farming – runs their home farm of 600 acres and a further 2,200 acres for a range of customers in the region.

He abandoned ploughing for non-inversion tillage and a cultivator drill around the millennium, which reduced the time and cost taken to establish crops in the autumn.

And now he feels he is moving forward again by switching to ‘strip tilling’ crops, having invested in a Mzuri Pro-Till 4, a British-designed drill that places the seed accurately with no prior cultivation.

He has started by using the drill on his family’s farm with the aim of gaining practical experience of the technique before offering it to customers:

“We had direct drilled some crops with the cultivator drill quite successfully in the right conditions and the right season, but we still have some heavier bits of land that need restructuring, so we still did some preparatory work ahead of it.

“Last autumn we strip-tilled our oilseed rape and it looks excellent. One noticeable difference is that we have an even crop right up to the field edge; there is no headland because we are not turning on it with heavy cultivators all the time”.

The Mzuri has also sown both winter and spring beans: “We drilled winter beans on land which we had loosened because we knew it had a plough pan, and then went straight in onto undisturbed land this spring.

“The drill easily penetrated to the depth we needed and the crop germinated within 48 hours. There is now a mass of root structure where the soil has been moved. We have fitted the new design of harrow which seemed to help”.

He has started using later drilling dates to help control Black-grass, and moving to a strip-till system should help that as it eliminates the preceding passes: “With our former drill we started drilling in early September, which seemed to suit the Black-grass.

“Last autumn on our own farm we drilled wheat into rape stubble on September 25th, but establishment was a little slow and the slugs got hold of it. Next season we will go for a stale seedbed and drill slightly earlier – it is a learning curve and we need to be sure we know the system before we roll it out across customers’ land”.

Having a clean stubble from the previous crop, and not bringing up buried weed seeds, should help, he feels. “We did 110 acres of wheat direct into oilseed rape stubble and it is a handsome looking crop”.

One important benefit of using a one-pass system is that it eliminates the danger of being disrupted if the weather turns wet mid-season: “The crop is either drilled or it is not and if it isn’t then we can look at spring drilling. We cannot get caught out half way through the system”.

They do cultivate where needed: “We drilled 50 acres of second wheat into ground where we had used a sub-soiler to cure a compaction problem. The Mzuri worked straight into the stale seedbed. It actually looks better than some of the first wheats grown after oilseeds. It is clean as a whistle with not a bit of Black-grass to be seen.

“With the Mzuri it is one man, one tractor and one pass; you are not reliant on somebody else doing their job first”.

The Mzuri faced its hardest test on a new block of ground: “We only took control of it on April 1st and it is difficult land, but we direct drilled spring barley into it and it is up and away, so that is another option when we’re considering how to counteract Black-grass.

He says the drill does require significant power for a 4m model – but if you are only doing a single pass you are saving all the power from other operations. 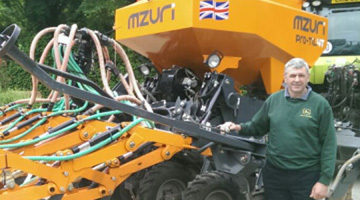