Even when you have a well-designed non-inversion crop establishment system, moving to direct drilling can achieve significant time and cost savings.

Brothers Philip and Martin Gibbs have 700 acres of arable crops on the 1,300 acres they farm at Upper Bentley Farm, Redditch, Worcestershire, the remainder of the farm being grassland that supports 600 beef cattle and 300 sheep.

They were looking to reduce the amount of labour required to run the farm, and have moved from a non-inversion system that uses four passes to direct drilling with a Mzuri Pro-Til4 trailed drill with a grain-only seed tank (a split grain/fertiliser option is available).

Among the key factors in their choice of drill was the quality of service and support they receive from the company and the pedigree of the designer, says Philip: “We know Martin Lole well, and were confident the drill was going to be designed and built correctly because his engineering skills are brilliant”.

It can either work direct or after a single preparatory pass: “We were trying to change the system to make the farm easier to run”, says Martin.

Their arable system was previously based around primary cultivation with a combined disc/tine cultivator, which was used to restructure the soil before a power harrow finished off the seedbed. After that they drilled and rolled: “We have done away with that system now and all we do is consider whether to do any preparatory work, and then drill and roll”.

After combining they remove all straw for the livestock and then decide what else is needed: “We might FlatLift a third of the acreage every year to ensure we keep the structure healthy and then use a straw rake on the other two thirds to ensure we get a good weed and volunteer chit and get them sprayed off ahead of drilling. Raking costs next to nothing”.

He says soil workability is improving, something assisted by the regular spreading of manure, which they work into the ground with a disc/tined cultivator.

“The soil’s workability is getting better and it feels firmer, so we can get on with the sprayer earlier and it doesn’t have any ruts in it. It feels firmer and drains better because the earthworms are there and we are not disrupting their home or the channels they make vertically through the soil”. 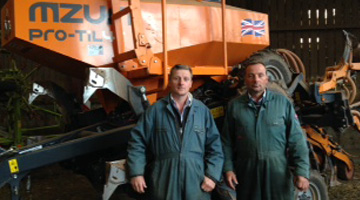